Posted by Anonymous at 2:04 PM No comments:

Posted by Anonymous at 9:04 PM No comments:

Thanks to Cindi Dorsey for these:
"We had our Summer Leisure World Iowa Reunion. On August 10th, we met at Pizza Ranch in Marshalltown. We had a great afternoon (eating of course) and catching up on happenings in our lives. Several former residents came also. Charlie and Millie Lombard, Joann Whittington and LeRoy and June Nielsen. So happy to see them."

Posted by Anonymous at 9:01 PM No comments:

Beth and I finally managed to communicate, and I procrastinated!  Here are some nearly week-old photos from last week's cookout.


Posted by Anonymous at 9:53 AM No comments:

This evening our regularly scheduled cookout served a dual purpose. The residents in charge were Jerry & Cindy Keesee. It was a bittersweet occasion as they have placed there home up for sale and are moving to Apache Junction, Arizona. The rest of the residents conspired to give them a sendoff and let them know just how much we would miss them with a surprise Farewell Party. All attending were serenaded from 4 to 5:30 pm by Jim Staton (photos to follow if Beth & I can coordinate transfer), and a cake and card shower occupied a table of honor. Jo Anne Kurtenbach provided some photos of the honorees and the cake.

Thank you to all who brought gifts, cards, and well wishes to our surprise 50th anniversary party. It's a blessing to have friends who care for you like family. You have touched our hearts.
Sincerely, Tom & Donna Colstrom
Posted by Anonymous at 9:50 PM No comments:

Roger Movold has Passed Away

It saddens me to tell you that Roger Movold passed away at 72 years of age on August 15th. Roger and Pat rented in Leisure World in 2003 and 2004 and were along with the big group that did the Panama Cruise.

Posted by WallyBee at 2:05 PM No comments:

Joann Whittington reports that 20 people showed up at Pizza Ranch. Great conversation, they had a very nice time.
Photos courtesy of Joann.

Posted by Anonymous at 1:38 PM No comments:

Today's Cookout in the Leisure World Rec Hall featured musical entertainment. Jim Staton provided us with a wide variety of musical selections starting at 4 pm. It was much enjoyed by all...those listening and those dancing! Photos are courtesy of Beth Staton...and there was NOT ONE featuring our entertainer!  Here are some Leisure World folk enjoying themselves and the music.


Posted by Anonymous at 9:48 PM No comments:

A "ghost" from my past

This afternoon I went to the bookcase to look over our library (now largely replaced with paperbacks and e-books) and discovered something that revived long ago memories.  In the volume "The Book of Humorous Verse", purchased by my late sister Hazel in about 1941, I found several bookmarks had been left. One was a 2 cent postage stamp, another a newspaper clipping that really caught my attention. No date or paper identifing information, it had obviously been clipped to retain for reference. It is headlined "Ration dates".
Most of you weren't around during World War II. The entire country, civilians as well as military, were heavily involved. Rationing of many items was in force. I remember that because we lived on a farm, not in town, we had an "A" sticker for the windshield of Dad's car. That meant we were allowed to purchase a bit more gasoline than the "B" or "C" stickers. There were ration books for everyone in the family, determining how much and when you could purchase various items.  You had to pay the price of the item, and produce enough of the proper coupons to cover what you bought.  I admit, I had sort of forgotten how many things were rationed. We remember gas, fuel oil, and sugar....but that was only the scratch on the surface.  Here is a scan of the "Ration dates" that has survived as a bookmark for 75 years.

Posted by Anonymous at 2:37 PM No comments:

Phyllis and Dick Connett celebrated their 54th anniversary on July 28, 2016.  Daughter Lynsley Hipsky surprised them with a nice delicious cake.  Thanks Lynsley. 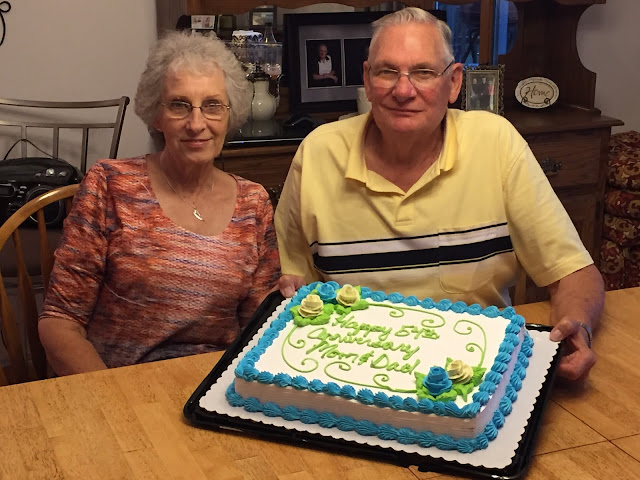 Posted by Phyllis and Dick Connett at 2:24 PM No comments:

I want to thank all of our Leisure World Family for your wonderful displays of love and concern for me during this very difficult time for us.  I received beautiful cards, words of blessing and many prayers from you and I am so grateful.  I am at home now and enjoying being in my own place.  I still have lots of work to do but it's nicer to do it here at home.  Thanks again so much.  Charlie and I really love you guys, you have been wonderful to us.  Linda Belcher
Posted by Unknown at 10:39 PM No comments:

Wow! Talk about friends helping out friends! This afternoon I happened to think out loud when I was standing at the door of the office on my way out. I said something about being so old and helpless any more that I couldn't even wash my golf cart...and it certainly needed it. I would have to seek out someone to do that task for me.
Someone was listening!  This evening Priscilla, her husband and daughter showed up at our door and announced "We're going to wash your golf cart."  AND THEY DID! A BEAUTIFUL JOB TOO.
What can I say, friends are wonderful, and I count myself very lucky to have our Priscilla, and by extension, her family, as a friend! Thank you, thank you, thank you.

Pat LaFoe has been in the hospital for several days.  Please keep Pat, Ray and family in your prayers as the doctors decide on treatments for heart and kidney problems.