THE WEEKEND IS HERE...

Posted by Phyllis and Dick Connett at 5:12 PM 1 comment:


Posted by Anonymous at 6:31 PM No comments:

Our day was considerably brightened Sunday, Father’s Day, as it had additional meaning for two of our Leisure World residents. Dave and Carol Slater celebrated their 62nd wedding anniversary and six of us had the privilege of celebrating with them during a dinner party. A few stories unfolded and much merriment was enjoyed by Jewett Powers, Jim & Beth Staton, Alex Kane and Scotty & Shirley Marriner.


Carol brought several of their wedding pictures from that beautiful day and we’re pleased to share them with you.

Saturday, we spent the day at Whitewater, Wisconsin with family.  We celebrated some birthdays and Fathers Day and had a great meal. 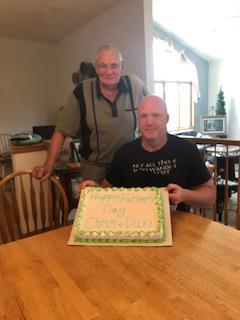 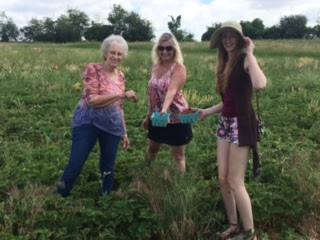 Then our daughters and grandsons visited the Berry Farm and picked some fresh strawberries which everyone enjoyed. 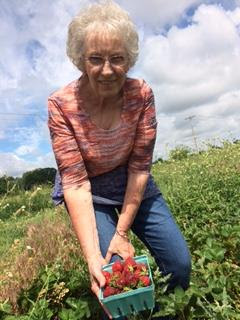 This brought back memories, as when I was about 13, I use to pick strawberries for a farm that was in my small hometown. 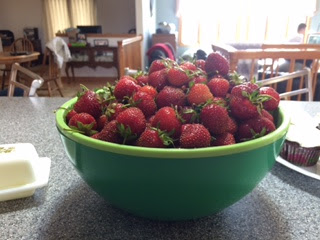 They sure were good.
Posted by Phyllis and Dick Connett at 10:03 PM No comments:

Dick got a nice surprise on Friday, June 16th, which was his birthday.  Oldest daughter Lynsley and one grandson Nick from Wisconsin came knocking at the door and with her she had our youngest daughter Carrie from Iowa.  Then shortly another knock on the door and our granddaughter from Wisconsin came in.  He heard from all the grandchildren, and many, many other birthday wishes.  We all had a nice birthday lunch at Applebee's. 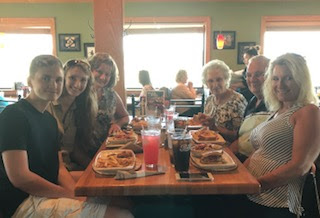 Posted by Phyllis and Dick Connett at 9:26 PM No comments:

HAPPY FATHERS DAY TO ALL YOU AT LEISURE WORLD.  HOPE YOU HAD A WONDERFUL DAY.

Posted by Phyllis and Dick Connett at 9:03 PM No comments:

Thanks to Laverne Soetebier for the email advising us of Cyrilla's passing. Cyrilla was a longtime resident and we still claim daughters Terry Caywood and until recently Nan Alden.

Cyrilla (Salstrand) Collard age 92, of Proctor passed away peacefully Wednesday, June 14, 2017 at Diamond Willow, Proctor, with family at her side.

Cyrilla graduated from Morgan Park High School in 1943, attended St. Scholastica and graduated from the University of Wisconsin, Superior in 1960 with a teaching degree. She taught at Irving and Stowe Elementary, retiring in 1983. Cyrilla was a member of St. Elizabeth Catholic Church, the Slovenian Women's Club, ADK Sorority and the Gary-New Duluth Community Club.

Cyrilla spent 27 years of retirement in Weslaco, TX. She loved playing cards, especially Bridge and spending time at the "5 Paws" cabin. Cyrilla was known for her religious faith, her strength of character, perseverance of physical pain and generosity to others.

She was preceded in death by her husband, Clifton; her parents, Otto and Minerva; and brothers, Maurice and George Salstrand.

Gathering of family and friends from 10 a.m. until the 11 a.m. Mass of Christian Burial Thursday, June 22nd at St. Elizabeth's Catholic Church, 610 99th Ave. W, Duluth. In lieu of flowers memorials are preferred to MCCL or an educational institute of your choice. Arrangements entrusted to Cremation Society of Minnesota, Duluth, 218-624-5200.
Posted by Anonymous at 9:46 AM 1 comment:

In my spare time (ha, ha, ha), I've started making jump ropes for our daughter Carrie and Grandson Denver to take to Africa.  This will be Carrie's 7th trip to Africa to be with the children which she has gotten to know quite well.  Denver has been there several times also, and they will both be leaving in August.  This time they will be helping to teach planting a garden and caring for it.  The children didn't know what a jump rope was until Carrie took some one year and taught them to jump rope.  These I am making from plastic bags, cut into strips and braided together.  WHAT FUN... 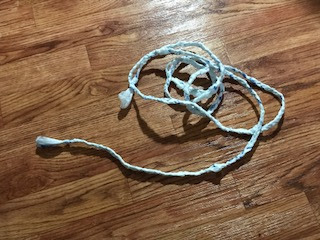 Looks like a snake, but only a 6 foot plastic jump rope... 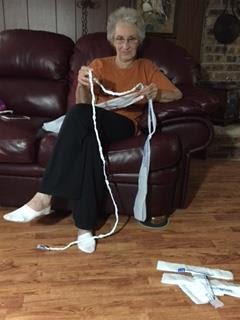 Actually it goes pretty fast.  Have three done and only worked about an hour.  Gotta keep braiding...
ANYONE CARE TO MAKE SOME???? 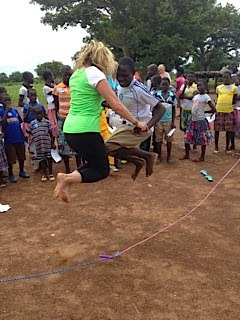 Posted by Phyllis and Dick Connett at 9:26 PM No comments:

On The Road Again

It has been non-stop traveling for Dick and Phyllis.  Since we arrived back in Illinois, we have made a few trips to Iowa for Alumni Banquet, Memorial Weekend and Family Reunion.  But this last few days we spent time with some RV friends who we meet with each month.  This month we made it to the little town of Big Rock, Illinois.  The campground was beautiful.  We had thirteen Winnebago coaches that gathered for a four day outing.  Out to eat a lot, shopping at unique shops, but two outings that stood out was the tour through a "House of Wool" and for the men, the Air Classics Museum of Aviation.

They came by Air...  and changed history forever.  From the bitter-cold skies above war-torn Europe, to the scorching-hot desert of Iraq, air power has decided the outcome on the battle field - ultimately the world.  As Americans, we owe the freedoms and riches that we're blessed with, to the heroic sacrifices of our fighting men and women in the air; for without their courage and determination, it would be a much darker world indeed.  It is at the Air Classics Museum of Aviation who were dedicated to preserving these planes.  We have four men from our group who were once or still a private pilot, so this was really enjoyed by them. 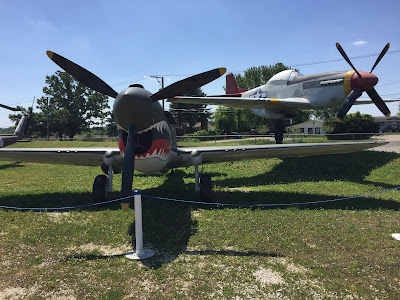 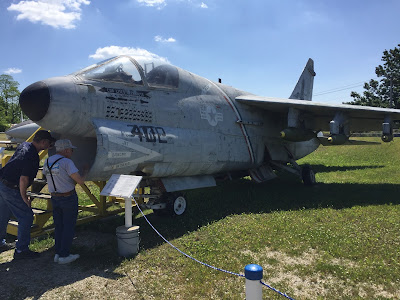 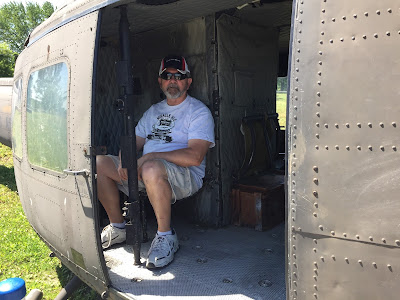 Dennis Olson (Rockford, Illinois) served in Viet Nam and flew in a helicopter exactly like this one.  This is were he sat. 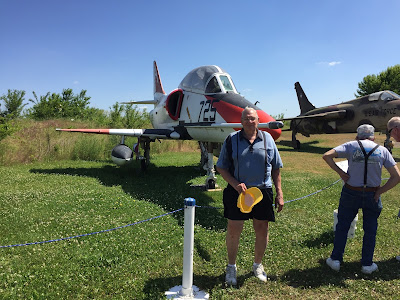 Dick Connett (a private pilot) in front of the 725 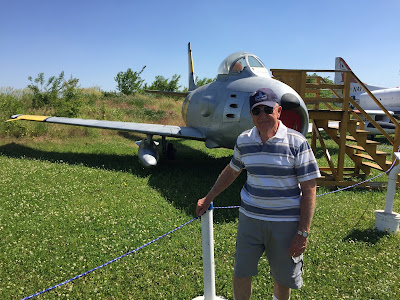 Jim Gastel (another active private pilot) also from our town - Freeport, Illinois
I think the men all enjoyed the museum very much.
THEN, while the men were away, the ladies
went to the big town of Hinkley, Illinois to an old home that has become a house of wool. 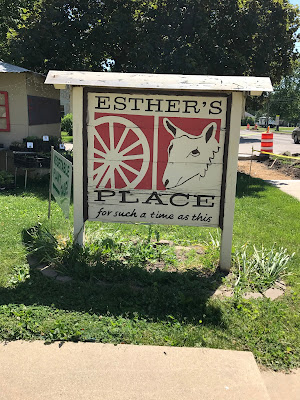 The family raised sheep and decided to open up the home to selling wool and the products.  It was amazing as to what our guide could do with the lambs wool.
The Esther house was named after the first sheep that they raised, which lived to be ten years old.  The house had many items of what could be made from wool.  She showed us how to dye the wool, how to spin the wool into thread and other techniques. 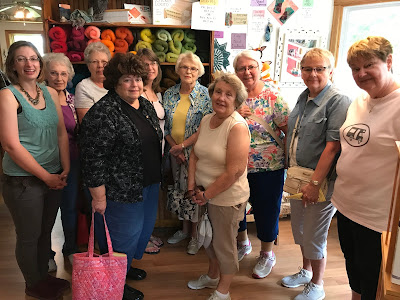 Our lady on the left (next to me - Phyllis) was our guide. She could make almost anything from wool.  She showed us how to take a "frame",  put some wool in the frame and punch down with a special needle to make felt.  Second lady from the right is a past Leisure World resident - Gwen Brown. 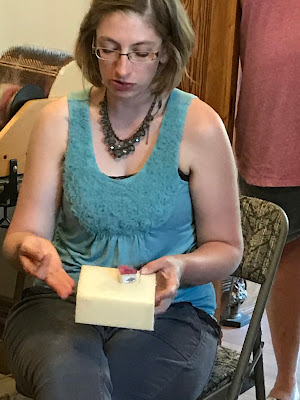 The heart below is an example.  She also made the owls.  (Purses, clothing, bird houses, figures, bracelets, you name it, she could make it) 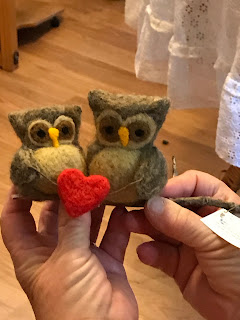 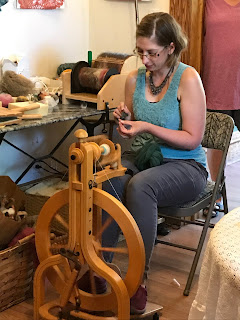 She demonstrated how to make the wool into thread... 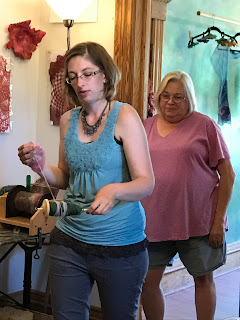 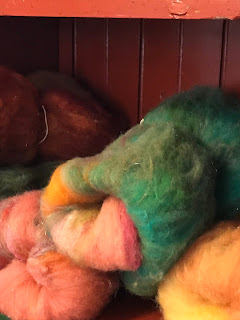 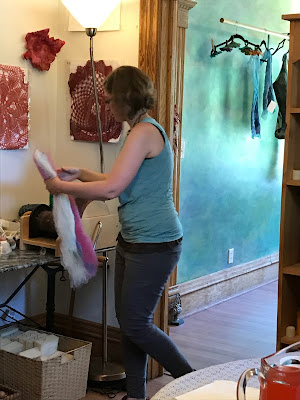 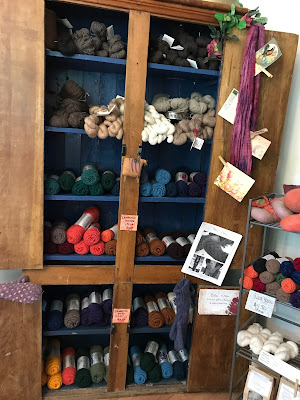 It was a very interesting morning.
Posted by Phyllis and Dick Connett at 7:45 PM No comments:

Everyone have a great day.... 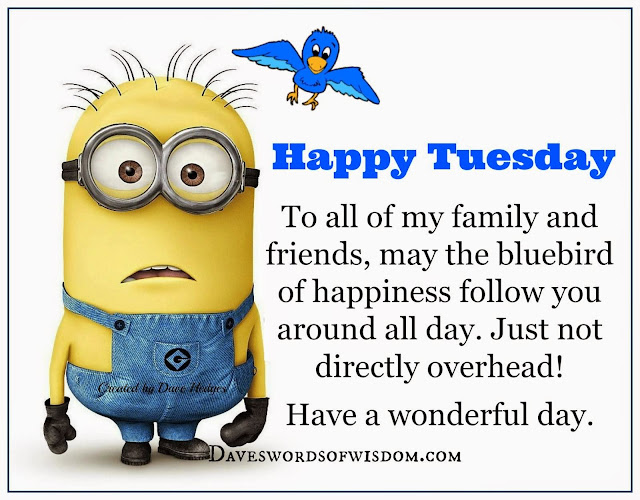 Posted by Phyllis and Dick Connett at 10:47 AM No comments:

Although Kim will have to wait until tomorrow to actually reach the SIX-O milestone, many of us helped her celebrate at the hall on Sunday. 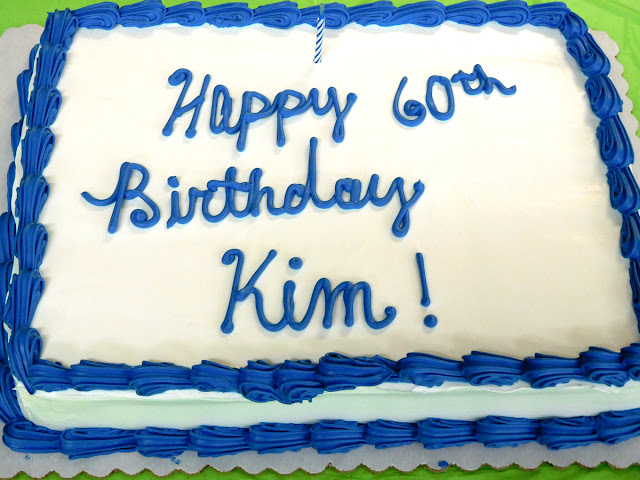 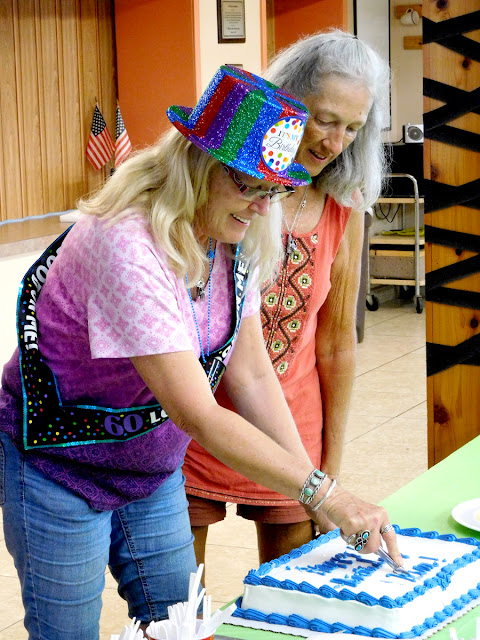 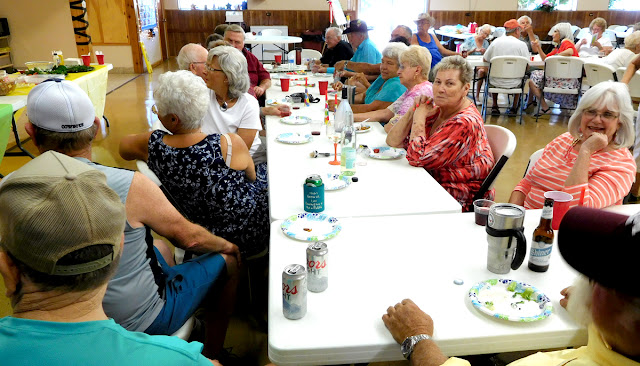 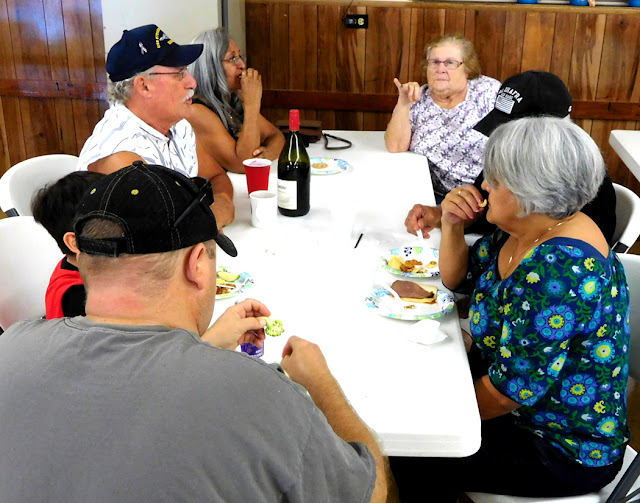