Posted by Scotty & Shirley Marriner at 9:52 PM No comments:

Seems Winter Texans are coming in earlier and earlier. More than 50 were here for the last Full-timers Cook Out last Saturday night.


Posted by Scotty & Shirley Marriner at 1:56 PM No comments:


Posted by Scotty & Shirley Marriner at 10:30 PM No comments:


Posted by Scotty & Shirley Marriner at 9:02 PM No comments:

Our quick Texas road trip is over. Since we will not be able to go to our southern home this winter because of medical issues, we made a quick decision to head to Texas. Decision was made on  Sept 22 and we departed Sept 25 with our Cherokee pulling our small motorcycle trailer behind. Our teacher granddaughter Kathleen in Edmonton has a teaching friend, Vanessa in Rockport, TX. Hurricane Harvey had wiped out much of the school including all of the reading books. So Kathleen started a project at her school to collect elementary reading books and needed a way to get them to TX. Since we were going down, we took 7 boxes of books, posters, scribblers, etc and met with Vanessa. The school was still closed so she would be storing them in the back of her SUV. Rockport is in shambles. Many buildings are demolished and there were stacks of trees, building materials, appliances along the streets everywhere. Many roofs were damaged or gone. Some buildings seemed to be fine but most had some damage. I have included this picture of a five story boat storage building to show the power of Harvey. It was amazing that Weslaco hardly got a raindrop out of Harvey. 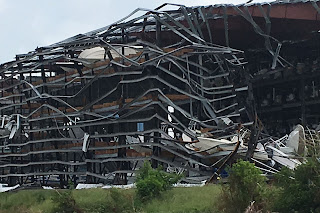 We arrived Leisure World about 4pm on Thursday, September 28. We met with Ardy and Gordie Thompson who said they would buy us dinner later at the The Ranch House. We then went to see Joanne and Don Kurtenbach for a few minutes. While there we seen people coming to the Annex for cards. We got to see Lloyd and Mary, Maxine, Pat LaFoe, Roxy and a big surprise was Chuck and Shirley Harreld. Chuck and Shirley were down getting some dental work done before heading to Iowa until thanksgiving. As we were leaving we seen Roxie Foxy and told her not to tell her folks that we were in town. We would surprise Dan and Fran later that evening.

Then we would begin sorting through our possessions and deciding what we would take back to Canada. The next day we put our Jeep Liberty up on Craigslist and had it sold within a few minutes. Rita and Scott arrived a couple of days later and had convinced us that they would be willing to put our mobile up for rent as all there units were rented and they were still getting requests. On Monday our daughter Brenda and grand-dog Pepper arrived from Cypress to assist us and take some things home with her. She would take some of our tools to grandson Dylan. We went to the park meeting on Tuesday and seen most of the other full-time Texans. Jim Edwards led a very short meeting.

We would close up the mobile on Thursday and were on our way by noon. It was a week long very sweet visit and we will miss our winter friends and fun tremendously. Hopefully we will get renters and if we are able to return in 2018 we would love that. The road trip amounted to 5,444 miles or 8,761 kilometers.
Posted by WallyBee at 1:31 PM No comments:

Our birthdays are in November, for Shirley, and December, for Scotty. Since we are not with family during these months our Sioux City group decided to give us a joint "Early Birthday" party on Sunday. Present were kids, grandkids and great grandkids. WHAT A BLAST! Our son-in-law, Marty, did BBQ'd ribs on the grill. Others brought cheesy potatoes, baked beans, coleslaw, a host of condiments and some good old Iowa Beer.


And great granddaughter, Clara, turned the tables on Shirley and spoon fed her ice cream and brownie.

Posted by Scotty & Shirley Marriner at 12:27 PM No comments:

Connie Garrels and Rosemary Hedlund enjoyed the AQS-Des Moines Quilt Show on Friday.  Connie's sister and sister-in-law were with them.  Good time was had by all.

Bill and Rosemary have moved to Scottish Rite Park. It is a 12 story retirement community.  They love their new apartment.  Their new address is 2909 Woodland Ave.#804, Des Moines, IA 50312.  Hello to all our Leisure World friends.

Posted by Scotty & Shirley Marriner at 1:08 PM No comments:

These Folks Need a Lift

We received the following message from Sue Heiderscheidt this morning.

Stan's brother, who lived at Lot 153 in Leisure World a few years ago, lost another daughter on Sunday.  She (Stephanie) fought cancer for almost 4 years with all her strength right up to the end.   This is the 3rd daughter who has died.  They have one daughter left. Please keep them in your prayers. If you would like to send a card, their address is: