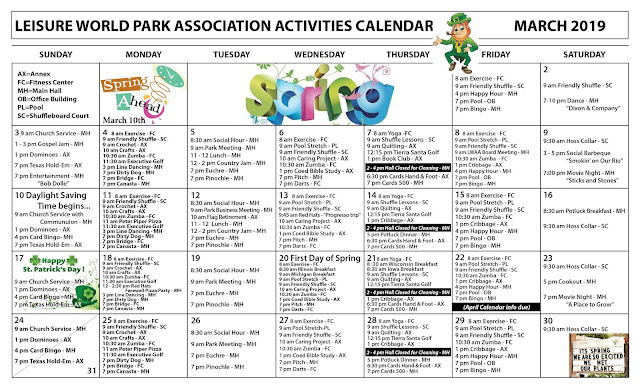 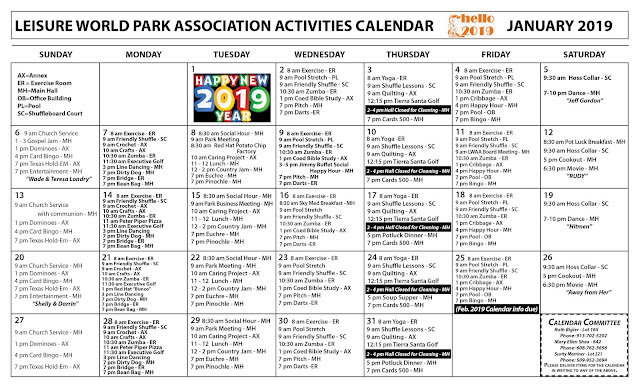 Posted above is the revised version of the January Activities Calendar. It corrects the error on Sunday, January 13th wherein the December Christmas Party was accidentally shown instead of Card Bingo at 4 pm. If you find any other errors, please bring them to our attention. It can be re-printed from the picture above. Scotty--
Posted by Scotty & Shirley Marriner at 1:06 PM No comments:

Hi Y'all…
There have been a few revisions to the December Activities Calendar. They are reflected in this document, which you are free to print out. Although it is legal size, 8½" x 14", it will also print on a standard 8½" x 11" letter sized sheet. 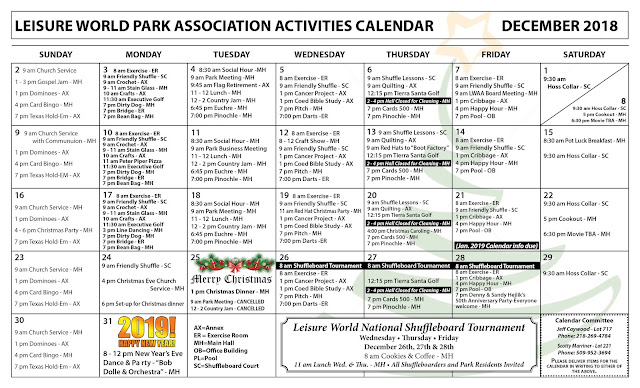 Posted by Scotty & Shirley Marriner at 2:00 PM No comments:

For Rent   420 Saga Palm. See Classified section below.
Posted by Chris Ritenour at 7:26 PM No comments:

Another shuffle season is well underway.  More shufflers are showing up as residents are coming into the park every day.  I want to thank all who helped with the Don Johnk Memorial tournament.  We were a little short handed but folks stepped up and did double duty to ensure a successful tournament.
Our tournament shufflers have done quite well this season.  We have four tournaments in the rear view mirror and four trophy winners.  Galen & Mary McCrary placed fourth in the main at the Don Johnk Memorial tournament and placed third in the main at the Alamo Palms tournament.  Clarence Thomas places fourth in consolation at the Casa De Valle singles tournament.  Galen and Clarence took second in the main at the Siesta Village doubles tournament.  Jack Fisher and Jean Gruver placed third in expert consolation at the Don Johnk Memorial tournament.
We have had a few come to lessons on Thursday mornings to learn the basics of this fun game.  We encourage more of you to give it a try.  Thanks to Dan Foxhoven, Clarence Thomas, Galen and Mary McCrary and Carol Johnk for helping with lessons.   Friendly shuffle is held Monday and Wednesday at 9 AM.  We have hoss collar Saturday morning at 9:30.  On Fridays we have been going to Friendly Fridays with Siesta Village, Ranchero, Trails End, Country Sunshine and Southern Comfort.  The Friendly Fridays have been a lot of fun and gives us an opportunity to play others shufflers in a relaxed atmosphere.

Lorna and I and three other couples completed a wonderful motorcycle trip to Tennessee, North Carolina and Missouri. We did the motorcycle rally ‘WingDing 40’ in Knoxville, TN for four days. From there we spent a week in Fontana Village Resort in North Carolina. This is minutes away from one of the world’s best motorcycling road called ‘Tail of the Dragon’. Fabulous riding all over this area but the ‘Tail’ is really beyond comprehension. It has 318 corners in 11 miles and climbs and drops over 1,100 feet in the process. Then we spent a week in Hollister, Missouri just outside Branson. Southern Missouri and northern Arkansas is also great riding country. The total trip was over 27 days and covered 6.515 miles or 10,585 kilometers.

Along our way we hooked up with some old friends from the Rio Grande Valley.

Our first visit was to see Fran Bell from Alexandria, MN. Fran and two daughters greeted us with coffee and goodies and some great reminiscing. Fran and her late husband Jack wintered in Leisure World’s for many years on Palm Way, better known as the Alley. Fran, by the way, is a diligent watcher of the Leisure World Blog.

Then we hooked up with Stan and Sandi Quinn in Hendersonville, NC. These two spent several years in Leisure World before moving to Siesta Village. Both of them were huge into shuffleboard and I attribute much of my love of the game to coaching from Stan. They now live full time in NC and are still big into shuffling in that state.

We tried to connect with Mike and Karen Myers in Springfield, MO but they had a commitment in Kansas City. We did however have a nice phone call with them. They lost their park model 333 in Leisure World due to the flood. They hope to return to the RGV this winter but will rent somewhere in the valley.

On our return trip we hooked up with Ray and Denise Burnell in Richer, Manitoba. They were having a huge party on their farm but invited us to join them for a great breakfast and lots of reminiscing. It was so nice to see them again.

Finally we visited Betty Wikdahl in Winnepeg, Manitoba. Betty was my tournament shuffleboard mixed partner for 5 years. Many Leisure Worlder’s may remember watching her and I play in the two Leisure World tournaments from 2011 to 2015. Betty was a terror on the courts and so much fun to have as a partner.

We also had Janet Doerkson on our visit list, however Janet was enjoying a vacation to Prince Edward Island.

Lorna and I did do shuffleboard over the summer here at a curling rink in Edmonton. They put 12 plastic courts down on the curling rink floor. They are much faster than our Leisure World courts so it took some adapting to get the speed down. We wish Laverne Soetebier and all of the Leisure World shufflers a great winter season.

It is so sad to hear of all of the units being pulled out of Leisure World due to the flood damage. We doubt that we will get to south Texas this winter, but are hoping we can spend part of the winter in Arizona.
Posted by WallyBee at 12:13 PM No comments:

Thank you from Priscilla 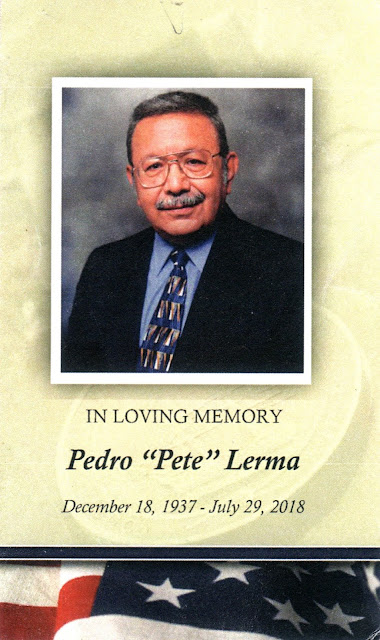 Thanks to all of you who sent cards and calls of condolence to me on the passing of my dear father! I am so grateful for all the words of sympathy and encouragement! I really appreciate your kindness!

Priscilla Gonzalez
Posted by Scotty & Shirley Marriner at 10:36 AM 2 comments: